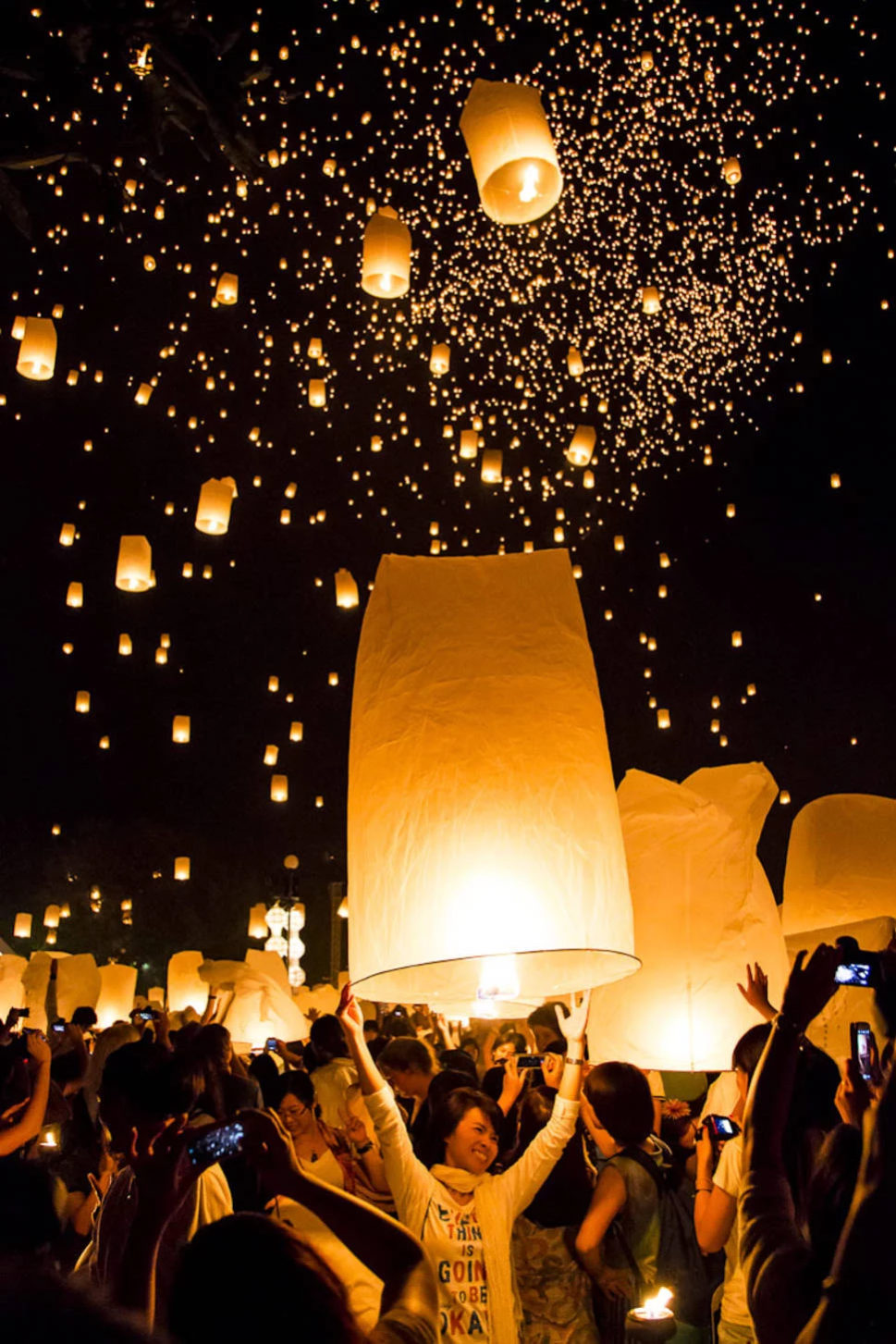 November 21, 2018
Posted by: Budgetcatcher-Team
No Comments

One of the most picturesque festivals in Chiang Mai is the evening of Loy Krathong, when people gather around lakes, rivers and canals to pay respects to the goddess of water by releasing beautiful lotus shaped rafts, decorated with candles, incense and flowers onto the water. Every year, Loy Krathong falls on the night of the twelfth lunar month (usually in November), at the end of the rainy season when the full-moon lights up the sky. The sight of thousands of Krathongs, their flickering candles sending a thousand pinpoints of light far into the horizon is a truly magical site, and there are plenty of places in Chiang Mai where you can get involved with the festivities.

What is Loy Krathong?

The history behind the festival is complex, and Thais celebrate for many reasons.  The main rice harvest season has ended and it’s time to thank the Water Goddess for a year’s worth of her abundant supply, as well as an apology for polluting the waters. Some believe that this is the time to symbolically ‘float away’ all the anger and grudges you have been holding onto, and including a fingernail or a lock of hair is seen as a way of letting go of the dark side of yourself, to start anew free of negative feelings. If your candle stays alight until your Krathong disappears out of sight, it means a year of good luck.

Where to See Loy Krathong?

The festival is celebrated throughout Thailand and wherever you are, there is almost certain to be a Krathong celebration somewhere close at hand. Loy Krathong is particularly famous in Sukhothai, Ayutthaya, Chiang Mai, Bangkok and Tak. Old Sukhothai hosts one of Krathong’s most beautiful festivals. The celebrations last two week, with the ancient ruins illuminated and the ponds lit up by candles. Parades, firework displays and concerts attract a large number of Thai and foreign tourists. In Chiang Mai, the main focus is on the Ping River and the moat that surrounds the old town. In addition to the floating krathong, khom loy and khom fai fire lanterns are released into the sky, because in Chiang Mai and other areas of northern Thailand, the popular Yee Peng Festival is also celebrated at the same time as Loy Krathong. In Bangkok, the Chao Phraya River is the main focus for celebrations with bridges and buildings decked out in bright lights for the occasion. Places such as Lumpini Park with its lake also draw a large crowd. In the seaside resorts and islands of Thailand, tourists and locals usually gather on the beaches to float their krathong onto sea, unless there are lakes or lagoons in the vicinity like Samui, Chaweng Lake, or Phuket, Karon Lake and Bang Tao Lagoon.
Be a part of this amazing festival and gain the experience of a lifetime. Say goodbye to all your anger and grudges and let the water take them away with its gentle waves.
Book your Loy Krathong car rental now & pay at pick up! Call 0876 – 22 77 99
www.budgetcatcher.com